A Separator, A Blue Ocean

Get Your Custom Report Immediately:

The cost of the separator accounts for about 10%-20% of the cost of the lithium-ion battery. Due to its extremely high technical barriers, the gross profit margin can be as high as 50%-60%. It is the product with the strongest gold absorption capacity among the four core materials. Therefore, the lithium battery separator is regarded as one of the industries with the most investment value in the lithium-ion battery industry chain.

Get Your Custom Report Immediately:

Benefiting from the popularity of new energy vehicles, the shipments of EV batteries have been rising from 13.8GWh in 2013 to 116.6GWh around the world in 2019.

The number of new energy vehicles has a great effect on the demand for EV batteries. According to the planning of the Ministry of Industry and Information Technology, the ownership of the domestic new energy vehicle will reach 5 million by 2020 with the sales of 2 million, accounting for about 12% of the total sales. It is estimated that the demand for EV batteries will reach 90GWh in 2020 based on the average energy consumption of 45kWh. 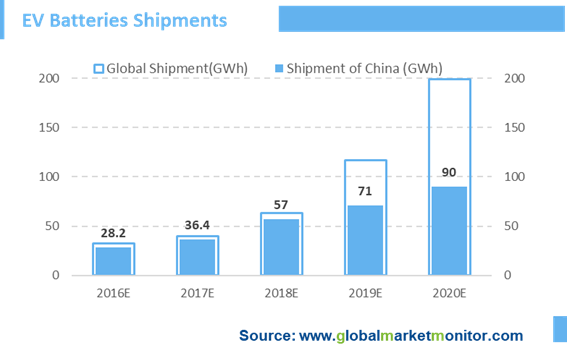 Separators show a growing trend due to the rapid growth of lithium batteries in the new energy tide. In 2019, lithium battery separator shipments in China were 2.98 billion square meters, an increase of 30.7% year-on-year, which is expected to maintain rapid growth. 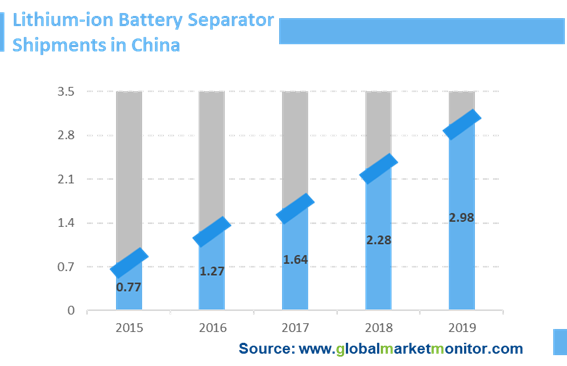 The Global Market for Power Battery Separators Is Expected to Reach 4.35 Billion Yuan in 2020

Different types of batteries use different separators. For different lithium battery series, since the electrolyte is an organic solvent system, a separator material that is resistant to organic solvents is generally required. It can be divided into a dry process and a wet process according to the pore formation mechanism, in which the dry process is divided into the unidirectional stretching method and the bidirectional stretching method.

The dry unidirectional stretching method is to stretch the film at low temperature to form micro-defects, and then pull the defects away at high temperature to form micropores. Because it is unidirectionally stretched, its microporous structure is oblong and has poor transverse strength, but the advantage is that there is almost no thermal shrinkage in the transverse direction. In the dry bidirectional stretching process, the addition of β-crystal with nucleation effect into the polypropylene causes density differences between different phase states, resulting in the transform from crystal type into micropores during the stretching process.

The preparation and production of the wet process are more complicated, where the traditional process membrane is mainly based on the phase inversion method. In recent years, the TIPS thermally induced phase separation method is mainly used. The principle is to convert crystalline polymers, thermoplastic polymers, and small molecular chemicals with high boiling points. The diluent is mixed to form a homogeneous solution at high temperature, and then the temperature of the solution is lowered to cause solid-liquid separation or liquid-liquid separation of the mixture. After the small molecule chemical diluent is extracted and removed, the thermoplastic and crystalline polymers are formed. The Concentration of the Lithium Battery Diaphragm Industry Continues to Increase

From the perspective of shipments of the lithium battery separator industry in 2019, the shipment of domestic wet-process diaphragm leader Shanghai Energy New Materials reached 865 million square meters, with a market share of 32%, and the domestic shipment of dry-process diaphragm leader Shenzhen Senior reached 365 million square meters, with market share Reached 13%. Another, in the field of wet membranes, the concentration of the top 4 manufacturers in the industry is also significantly improved, with CR4 from 68%in 2016 increased to 86% in 2019.